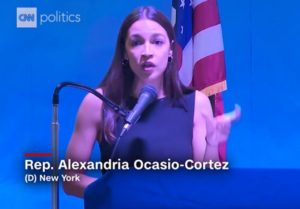 Washington (CNN)Democratic Rep. Alexandria Ocasio-Cortez on Saturday called for a “9/11-style” commission to investigate the Trump administration’s child separation policy, arguing that it’s “what’s going to be required in order to reunify as many children with their parents as possible.”

“In the 9/11 commission they had — they were charged with investigating and making sure they dug up every nook and cranny of what happened and how it happened in our system, and I think that that kind of study is what’s going to be required in order to reunify as many children with their parents as possible,” Ocasio-Cortez said during a town hall held in her district in Queens, New York. Two House lawmakers have proposed bills that would launch studies to examine the humanitarian crisis at the southern border. Ocasio-Cortez is not currently a co-sponsor of either bill.

The Trump administration’s “zero tolerance” policy on the southern border, announced in April 2018, led to the separation of thousands of families, and sparked a national outcry. Children were sent to detention centers run by the Department of Health and Human Services, and some were eventually placed in foster care.

Earlier this month, a House report on the policy, which ended in June 2018, revealed previously unknown details, including that at least 18 infants and toddlers under two years old were separated from their parents and “kept apart for 20 days to half a year.” Some children were kept in Border Patrol facilities longer than the allowed 72 hours, the House report found.

The 9/11 Commission Ocasio-Cortez was referring to — officially called the National Commission on Terrorist Attacks Upon the United States — was created in 2002 to provide a “complete account of the circumstances surrounding the September 11, 2001, terrorist attacks.” The 570-page report included 41 recommendations for reforming US security agencies to fight terrorism.

Her comments on the situation at the US-Mexico border come as the New Yorker finds herself in the midst of two high-profile clashes: one with Trump, who last Sunday implied in series of tweets that she and the three other congresswomen were not natural-born American citizens and should “go back and help fix the totally broken and crime infested places from which they came,” and another with House Speaker Nancy Pelosi after Ocasio-Cortez and the other progressive freshman lawmakers recently opposed a House border aid bill.