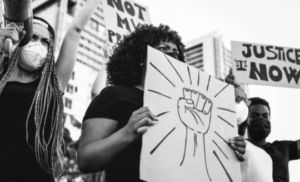 “In a racist society it is not enough to be non-racist, we must be anti-racist.”
-Angela Davis

Anti-racism is a term that has been reiterated by Dr. Kendi and has proliferated in use throughout the U.S. in the past year. It speaks to a proactive approach to removing the cancer of racism from our society. It is only fitting that this month, Black History month, we take a brief look at the anti-racist approach the Biden Administration is hoping to implement in the wake of the 4 years of racist immigration policy this country has been forcibly subjected to.

Racism devours the most vulnerable in our society including migrants in a merciless manner. The Biden plan seeks to pull the marginalized, undocumented immigrants from the shadows and offer them a path to normalcy and citizenship. His plan also seeks to allow those living in the U.S. with temporary protections such as deferred Action for Childhood Arrivals (“DACA”) or Temporary protected Status (“TPS”) a way to move from a vague temporary status to U.S. citizenship. The plan goes as far as to let family members deported under the Trump administration reunite with their family here in the U.S. It will also eliminate the 10-year bars to returning to the U.S. for those who left the U.S after residing in the U.S. undocumented. Biden’s plan will also allow for funding for legal representation for vulnerable immigrant populations.

Of particular concern to human rights advocates had been the previous administration’s attempt to strip U.S. asylum laws of any value. The implementation of the Migrant Protection Protocols, otherwise known as “Stay in Mexico,” as well as the reduction in asylum admission quotas, the reinterpretation of asylum precedents and the installation of the “death to asylum rule” introducing insurmountable barriers to asylum proceedings were all fueled by a racist agenda.
Biden’s anti-racist approach seeks to reinstate asylum admission quotas and withdraw the previous administration’s Supreme Court arguments supporting the “remain in Mexico” policies.

While the new administration must fight to regain control over the “wild west” of immigration policy, for example reallocating the controversial Emergency Border Wall spending, it must also address the rogue ICE agents who continue deportations despite the administration’s moratorium on deportations.

In fact, hundreds of asylum seekers and undocumented immigrants have been deported in the past few weeks despite Biden’s moratorium; which was challenged in court by the state of Texas.

It really brings into question whether Biden will be able to do more than simply rebuking white supremacy, as he did in his inaugural speech last month, and truly implementing his agenda with the previous administration’s minions still present in the system. Unfortunately, the systemic nature of racism remains prevalent and despite promises made we are still in a “wait and see” situation.