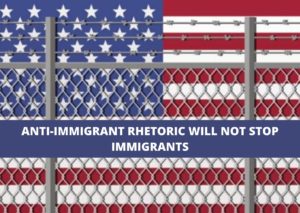 Recent events across Europe, Africa, and the U.S. all include a common theme: anti-immigration views. As anti-immigrant sentiment keeps rising, not only in the U.S. but worldwide, one must ask the obvious question? Why? According to a Global Issues.org article on immigration, it’s the economy (as well as human nature, according to a Czaja article that appeared on the UNHCR website).

Yet, to blame such rising tensions solely on economic factors seem simplistic considering that only 1/3 of immigrants come to the U.S. from a developing country (according to a Christian Science Monitor citing a UNDP report). In other words, only 1/3 of immigrants to the U.S. are seeking better financial situations. According to Burma’s article in the Globe and Mail, globalization and shifting demographics is causing an identity crisis in the U.S. and around the world, regardless of political or socio-economic backgrounds.
The fears generated by this crisis are now being directed at those who have most visibly adjusted to an ever-changing global stage: the immigrants.

When nativist, protectionist rhetoric surfaced in French politics in the form of Jean Marie Le Pen, the French people formed a “Republican Pact” which essentially unified ALL political parties in support of the common values of their nation above the political divide. This allowed the French mainstream conservative candidate to decimate the extreme right candidate in the 2002 presidential elections by receiving over 83% of the votes. Perhaps the U.S. can learn from that example.

In the wake of modern globalization and access, one can certainly count on immigrant populations coming to our borders, legally or illegally, welcomed or not. If the economy, demographic shifts, and new cultural, religious and cross-border identities are the main factors, perhaps we should shift our national discourse to managing these contributing factors in immigration trends rather than faulty exclusionary discourse based on our fears.