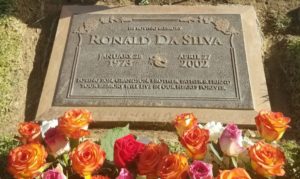 LONG BEACH, Calif.—Agnes Gibboney visited her son’s cemetery and his birth hospital on Nov. 23, a day after she learned the murderer of her only son was released from jail and immediately deported back to Mexico.

She left more than two dozen roses at her son’s burial site and dropped a few dozen more into the sea at the beach she and her son used to visit.

Gibboney is a member of the Angel Moms, a group of mothers whose children were killed by undocumented immigrants.

Gibboney’s son, Ronald Da Silva, was standing with a friend in his driveway on Apr. 26, 2002, when he was shot and killed by Luis Humberto Gonzalez, an illegal immigrant from Mexico.

Prior to shooting Gibboney’s son to death, Gonzalez had been arrested and released multiple times with probations. He was once deported back to Mexico, but later came back to the United States illegally.

Based on the information Gibboney obtained from her private investigation sources, Gonzalez was arrested on Sep. 30, 1994 and detained for 60 days on burglary charge, and was later released with 36 months of probation. He was again arrested on March 16, 1995 for giving false ID to a police officer, and was later sentenced to a probation. On June 15, 1996, Gonzalez was again arrested for burglary, but released once again for probation.

A U.S. immigration judge ordered Gonzalez to be removed in Aug. 1997. Gonzalez was eventually deported back to Mexico in April, 1999.

Gonzalez illegally came back to the United States not long after he was sent back to Mexico. On Sep. 25, 2000, he was arrested for corporal injury to a cohabitant but was released after spending 15 days in jail, and with a three-year probation.

Less than 20 months after being released from jail, Gonzalez shot and killed Gibboney’s only son. Gonzalez was still on probation when he killed Ronald Da Silva.