Home Resources Analysis: More Than 10 Million US Citizens Live With An Undocumented Immigrant 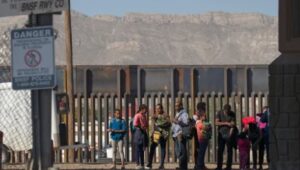 More than 10 million U.S. citizens share a household with an undocumented immigrant, according to a new analysis of Census Bureau data by immigration advocacy group FWD.us.

Nearly half of those U.S. citizens, 4.9 million, are children who have at least one undocumented parent.

The report shows the extent to which undocumented immigrants are integrated in their communities, with 22 million people living in mixed status households.

In addition, 1.7 million Americans are married to an undocumented immigrant, according to the report.

The analysis comes as immigrant advocates are pushing Democrats in Congress to fight to include immigration provisions in the upcoming $3.5 trillion reconciliation bill.

That bill, which is expected to include a wide array of Democratic social priorities, will not be subject to the Senate filibuster, and can pass without any Republican support.

Senate staff are scheduled to make their case Friday on what immigration provisions are eligible for inclusion in such a bill to the Senate parliamentarian, who will issue a ruling on the matter.

Advocates expect as many as 8 million people to be covered in the bill, gaining access to legal permanent residency, which is itself a path to U.S. citizenship.

Currently, undocumented immigrants and beneficiaries of the Temporary Protected Status (TPS) program are for the most part not allowed to apply for any kind of legal status.

Advocates want Democrats — and the parliamentarian — to include undocumented immigrants who arrived in the country as minors, TPS beneficiaries, essential workers and farm workers in the bill.

Some advocates have pushed for undocumented family members to be included as well, potentially raising the number of people eligible for benefits to 11 million.

The push for a blanket legalization bill rests on the expanding political and economic clout of the undocumented and mixed-status communities.