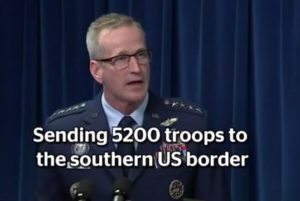 It’s a widely accepted truth of the Donald Trump era: The US President deliberately divides Americans on issues like immigration and often employs controversial rhetoric, but he’s doing it because it works! It’s his secret political genius!

What if it doesn’t, though, and what if it’s not?

Elections are so infrequent and there are so many variables that it’s very difficult to completely isolate one of them and render a verdict on its impact.

Because Trump won in 2016 and because culturally conservative, blue-leaning states along the Rust Belt cast the decisive votes, it’s not difficult to draw a line between Trump’s historically tough immigration rhetoric and his victory.

And there’s a real argument to be made today that turbocharging the immigration debate in the final days of the 2018 Midterm campaign furthers Trump’s and the GOP’s goal of energising a previously unenthusiastic base.

Throwing this on top of Brett Kavanaugh’s Supreme Court nomination would seem to do the trick – particularly when it comes to winning the red states required to keep the Senate.

But, as Republican pollster Glen Bolger often reminds us, enthusiasm is only part of the battle. And the Senate is only half the battle.

There is also real reason to believe what Trump is doing now could alienate independent voters and maybe even hurt the GOP’s efforts to keep the House.

The battleground there, after all, is in red-but-not-quite-so-red territory, and some polls suggests independents and those crucial areas aren’t so fond of Trump’s hardline immigration stance.

“I would not assume that it’s a positive or a negative,” Bolger said. “This is one of those things where we’re a heck of a lot smarter at midnight or 2 am on election night.”

The most recent Washington Post-ABC News poll this month showed independent voters favoured the Democratic Party 48 per cent to 32 per cent when it comes to handling immigration. That’s an almost complete reversal from in 2015, when independents favoured Republicans 43 per cent to 27 per cent.