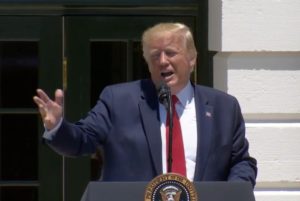 Over the last month, President Donald Trump’s publicizing of large-scale immigration enforcement operations seemed to have the intended result: wall-to-wall media coverage that indicated he was moving to fulfill his signature campaign promise to deport “millions of illegal aliens” from the United States.

But the threat of massive raids has also had a significant, unintended side effect. For the first time, many undocumented immigrants are finding out that when Immigration and Customs Enforcement come to their door, they have rights.

Immigration attorneys, advocates, and organizers in 10 cities across the country told TIME that the highly public threat of ICE raids, communicated directly from the White House, has gotten out the “Know Your Rights” information and prepared immigrant communities in a way that years of previous outreach had not.

“We are now seeing the ‘Know your Rights’ information really working to save people’s lives and teaching them that they have agency,” said Shannon Camacho, who coordinates a rapid response network for immigrants in Los Angeles.

When more than a dozen ICE agents knocked on the door of a family with two children in her community early in the morning last week, the father remained “calm and confident” because he knew what to do, she said. He refused to open the door unless agents presented a warrant signed by a judge and, speaking through the window, declined to give their names. He had video footage from the security camera, and knew to contact the rapid response network for legal help.

“Fifteen ICE agents, for one family,” said Camacho. “They were shaken up from the experience, but we told them ‘You did everything great, you understood your rights as a person here in the U.S. regardless of whether you’re undocumented or not.’’’

Like all legal and immigrants rights organizations who spoke to TIME, Camacho’s group has seen skyrocketing requests for information and “Know Your Rights” trainings. While these efforts existed long before Trump, his rhetoric and the unprecedented media attention to ICE operations has managed to help it break through in ways it hadn’t before.