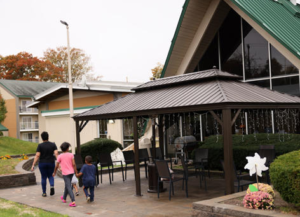 By candidate Charlie Baker’s own assessment, it was an ambitious goal: During his first term as governor, he intended to reduce the number of homeless families sheltered in hotels from around 1,500 to zero.

There was a fiscal incentive, of course. Before Baker took office in 2015, the state was spending nearly $50 million a year on hotels for homeless families. But his motivation also seemed personal, as if he just couldn’t stand the thought of Massachusetts families living in hotels.

“Many of them are located on busy streets. The parking lot is about as close as you get to outdoor space. There’s no kitchen. It’s just not the right answer for families,” he said last week in an interview.

Homelessness advocates agree and broadly lauded Baker’s years-long, successful campaign to stop sheltering homeless families in hotels. By November 2021, the number had fallen to just five, according to the Department of Housing and Community Development.

But in the final months of his tenure, Baker has seen years of progress reversed. The cause is migration. As thousands of families have surged into Massachusetts in recent months, after entering the country at the southern border, the state has had no other option than to revive the practice he has long sought to abolish, Baker said.

As of Thursday, the number of homeless families in hotels had crept back to approximately 220 and was trending upward, according to state officials. Now Baker’s successor, Maura Healey, seems likely to inherit the problem.

“Our goal is to make sure people have a roof over their head,” Baker said. “I don’t like the fact that the roof we are providing a lot of these families is a hotel or a motel.”

The problem has vexed Massachusetts governors for decades.

In the 1990s, Governor William Weld sought to stop sheltering families in hotels and Baker himself, the then-secretary of the Executive Office of Health and Human Services, helped the administration accomplish that goal. But by 2003, hundreds of homeless families were in hotels again, according to state figures.