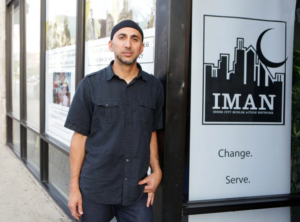 (RNS) — Rami Nashashibi, who founded the Inner-City Muslim Action Network on Chicago’s South Side 25 years ago, is a community builder, a teacher and a recipient of a MacArthur Foundation “Genius” award. Georgetown University has called him one of the world’s 500 most-influential Muslims.

What he is not is an imam. He is part of a rising generation of lay leaders blending ancient tradition with modern activism to mobilize their faith communities. Leaders such as Nashashibi are not replacing traditional institutions or houses of worship, but they bring an immediacy to their faith-based work that is re-energizing American religion.

Born in Jordan to Palestinian parents, Nashashibi founded IMAN in 1997 with his friend Abdul-Malik Ryan, a lawyer and Muslim convert, in Chicago Lawn, a traditionally Black neighborhood that was rapidly becoming a hub for Arab Americans. The two had the goal of providing a place where first-, second- and third-generation Muslim Americans, converts and non-Muslims would all feel included.

More specifically, however, IMAN’s model is adapted from the empowering wisdom of Black Muslim women, who for generations have built relationships with communities to organize for social change. Black Muslim women have been institution builders who have created new templates for Muslim life in America. “It’s critical to understand that there would not be an American Muslim experience without Black American Muslim women,” he said.