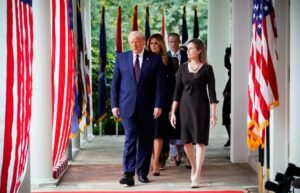 As an appellate court judge, Barrett helped to advance one of Trump’s key immigration policies. She sided with his administration in a case over Trump’s policy imposing a wealth test on the millions of immigrants who seek to come to the US annually. In her whopping 40-page dissent in that case, she laid out why the US has the right to block people who it deems likely to become dependent on public assistance in the future — even if they have never used public assistance in the past.

She has also repeatedly refused to review cases brought by immigrants applying for humanitarian protections and other immigration benefits who claimed they had been wrongfully denied. Some of those decisions may have negative repercussions for future such applicants; given that they set a precedent to be followed by judges in lower courts, these refusals could make it harder for immigrants to challenge an adverse decision from a consular officer on their visa application or obtain deportation relief from an immigration judge.

But her rulings haven’t always led to adverse outcomes for immigrants. In one case, she actually prevented the Trump administration from ending a policy that allows immigration judges to indefinitely close deportation cases in which the immigrant doesn’t appear to be a priority for enforcement, giving them a chance to live in the US without fear of deportation.

With Barrett’s mixed record — and only three years of experience on the federal bench — it’s difficult to predict how she would rule on immigration cases before the Supreme Court if she is confirmed, as expected.

The Supreme Court has upheld some of Trump’s signature immigration policies, including his travel ban policy. But it has also thwarted him at key moments: It has temporarily prevented him from ending the Deferred Action for Childhood Arrivals program, which has allowed more than 700,000 young unauthorized immigrants to live and work in the US, and blocked him from putting a citizenship question on the 2020 census, which experts said would depress response rates in immigrant communities.