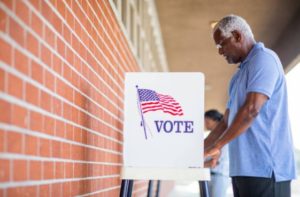 It’s a good start, say strategists, one of whom said that “usually, Latinos are hired in the last four months of the campaign.”

At the Kamala Harris campaign, Juan Rodriguez is steering operations as campaign manager. Chuck Rocha weighs in on a variety of issues as a senior adviser for Bernie Sanders. At Julián Castro’s campaign, Natalie Montelongo is the national political director, while in Joe Biden’s camp, Laura Jimenez oversees Latinx outreach and is one of five Latino senior staff members.

With some 32 million Latinos eligible to vote in 2020, there’s an increased Latino presence in the campaign staffs of Democratic presidential hopefuls, not only in jobs focused on Latino media and voters but in some senior staffing positions.

It’s a start, according to those who say past campaigns missed the mark on grasping the diversity and breadth of the Hispanic electorate and the experience and perspective that Latino staffers can offer.

“It’s what so many of us have been striving for in this space for so long, to not be seen as just the brown people who do things with brown people,” said Rocha, who took a break from his political consulting firm to work on the Sanders campaign.

Amanda Rentería, the first Latina to serve as a chief of staff in the U.S. Senate and Hillary Clinton’s national political director in her 2016 campaign, said campaigns are doing “absolutely better” in hiring Latinos in this cycle.

The numbers show that the Democratic Party’s investment in training and efforts to get diverse voices in the arena are beginning to pay off, she said.

Another factor is the large number of candidates running, including several women and two African Americans. With so many campaigns recognizing the need to hire Latinos, campaigns have had to reach to the state level to hire staff, Rentería said.