Home Resources Amid A Hispanic Boom, Conflicting Feelings On Immigration 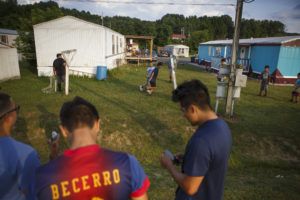 Immigration is near the top of the list of issues Americans find “the most worrying,” according to a new poll conducted for NPR by the research firm Ipsos.

But Americans’ views on immigration diverge sharply depending on party affiliation, where in the country we live, and whether we know people who were born outside the United States.

To explore some of the poll’s findings, we went to the small town of Galax, in rural southwestern Virginia, which has one of the fastest-growing Hispanic populations in the state. There, we found a community that holds many of the complicated — often conflicting — views on immigration that the nation does.

About 7,000 people live in Galax, set in the gorgeous Blue Ridge Mountains, close by the North Carolina border.

“When I was growing up, Galax was very white; a very traditional small-town mountain community,” says Elizabeth Stringer, 40, who teaches English as a Second Language at the high school.

Over the past 18 years, she’s seen her student caseload balloon. In the Galax schools now, almost a third of the students are Hispanic.

Most of Stringer’s students came from Mexico, but recently, she’s been teaching more kids who fled from Honduras. “Some of them through the desert,” she says, “some of them crawling through sewer pipes and being lost just to get here.

“I feel like anyone who can turn someone away who has done that to have a chance to live is just wrong.”

When Stringer hears President Trump compare undocumented immigrants to an “invasion” or “infestation” of the U.S., she bristles.

“I think of cockroaches,” she says. “I think of horrible nasty things to be eradicated and that’s not what these people are. They’re really good people.”

Another benchmark of Galax’s demographic change: of the 11 starters on the high school boys’ soccer team this past year, all but one were Hispanic.

Striker Ricardo Osuna, 17, who just graduated from Galax High and whose father is Mexican, says the Galax community is open and welcoming. But the opposing teams? Not so much.