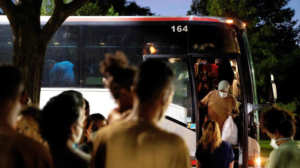 Support for immigration has hit a two-year low, according to a new Gallup poll released Monday, as a political battle heats up over Texas Gov. Greg Abbott’s strategy to send migrants from the Mexican border to Washington D.C. and New York City.

27% of respondents said immigration should be expanded, marking a downward shift from a peak of 34% that supported increasing immigration in 2020 and breaking a 65-year steady rise in support for immigration, according to the poll of 1,013 people conducted between July 5 and July 26.

38% said immigration numbers should decrease, up from 28% in 2020, while 31% believe it should be kept at the present level.

Meanwhile, opposition to expanding immigration, which had been dwindling since a high point of 65% in 1995, shot back up to 2016 levels (38%) in the new poll.

Among Republicans, opposition to expanding immigration is up 21 percentage points from 2020, to 69%, while Democrats’ opposition increased five points to 33% over the same time, widening the partisan gap to its largest spread of 52 points (the spread was 35 points in 2020 and eight points in 2001).

Gallup also found a significant difference between age groups, with 83% of respondents ages 18 to 34 believing immigration is good for the country, compared to 76% of people ages 35 to 54, and 57% ages 55 and up.

Abbott said in a statement last week that “because of President Biden’s continued refusal to acknowledge the crisis caused by his open border policies, the state of Texas has had to take unprecedented action to keep our communities safe.”