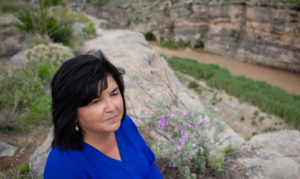 SANDERSON — Dale Lynn Carruthers had always been a Democrat.

Growing up in the small, predominantly Hispanic city of Sanderson near the border in West Texas, everyone she knew belonged to the party, which had long been dominant in the region. So when she ran for a seat on the Terrell County Commissioners Court for the first time in 2018, there was no question that she’d do so as a Democrat.

But after she became county judge in 2021, things started to change. President Joe Biden took office and promised to overturn many of Donald Trump’s restrictive immigration policies. At the same time, residents living in Terrell County, which has a population of less than 1,000, started reporting a significant increase in the number of migrants coming through the rough terrain.

Ranchers complained that large groups of migrants were entering through their border-adjacent land, cutting high fences, which risked setting their animals loose, damaging the water lines that supply their vast ranches in a semi-arid climate and making it harder for them to tend to their livestock.

On her family’s 17,000-acre ranch, Carruthers saw the same problems. Visitors who came to hunt wild game started stumbling upon the bodies of migrants who apparently died of heat while making the journey. One day, her husband was outside feeding the animals when he saw state police arresting a group of 49 migrants. They worried about the safety of their family.

But Democrats nationally weren’t talking about the border issues her community was experiencing firsthand. They were critical of efforts led by Republicans like Gov. Greg Abbott to build a border wall and increase the presence of law enforcement. Democrats, Carruthers said, weren’t listening. So she switched parties.

And so did many others. The county’s clerk and treasurer also became Republicans, as have most of the elected officials in county government.