Home State & Local Laws Almost 150 Guards Are Staffing An Empty Texas Prison As State Officials Work On Gov. Greg Abbott’s Plan To Use It For Immigrants 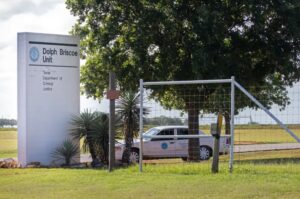 With the Texas prison system dangerously understaffed, nearly 150 guards are now working in an empty prison that Gov. Greg Abbott plans to convert into a state-run jail for immigrants who cross the U.S.-Mexico border illegally.

More than 1,000 prisoners at the South Texas Briscoe Unit were transferred to other state lockups weeks ago, but it’s still unclear when and how the emptied prison will be fashioned into a Texas-operated jail for migrants facing — but not convicted of — state criminal charges.

State agencies that enforce jail standards and regulate law enforcement training have scrambled to determine what changes are needed at the unit to house a non-prison population. And 147 Briscoe officers are training to be certified as jailers while the prison remains in “maintenance mode” awaiting further instruction, according to a spokesperson for Texas Department of Criminal Justice.

Meanwhile, the Texas prison system remains desperately short of guards, including one notoriously violent maximum-security prison that has less than half as many as it should, according to an agency report.

“They’re doing this on the fly. I don’t think anyone has thought through any of this,” said Michele Deitch, a senior lecturer at the University of Texas at Austin’s public affairs school and expert on prison and jail conditions.

Briscoe’s transition from a prison to a jail for immigrants began in mid-June as part of Abbott’s heightened push to quell an increase in apprehensions of migrants at the Texas-Mexico border. After the Republican governor declared the rise in illegal immigration a disaster in May, he directed the shift of $250 million from the prison agency’s budget to instead go toward building a border wall.

In June, Abbott said at a border security event that those who cross the Texas-Mexico border illegally — a federal crime — would be subject not only to federal apprehension but to arrest and confinement for state crimes, like trespassing and human trafficking.