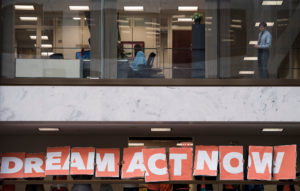 Friction lingers between Senate Democrats and progressive advocacy groups after the chamber failed to advance a bipartisan bill in February to protect the young undocumented immigrants known as Dreamers.

Tensions came to a breaking point in the weeks before the Senate voted on several immigration-related proposals aimed at extending the Deferred Action for Childhood Arrivals program, aides say. The rift was a long time in the making, as some Democratic lawmakers questioned the strategy that pro-immigration and progressive groups used to drive action over the past six months.

A handful of those groups — earning the ire of some Democrats — opposed a key bipartisan measure days before the Senate vote. And advocates in recent months increasingly exerted pressure on members of their own party, whose support for addressing the DACA issue was already locked in.

Democratic senators and aides felt that time could have been better spent targeting the dozen or so Republicans who could have potentially voted for the measure.

“It was unfortunate. I very much appreciate the frustration, the fear, the anger that they have. But they needed to direct it to the people that are stopping this from happening, and it’s not Democrats,” said Sen. Debbie Stabenow of Michigan, chairwoman of the Democratic Policy and Communications Center.

Missouri Sen. Claire McCaskill said she saw “missed opportunities to put pressure, particularly on Republicans in states where there’s a great deal of support for these young people.”

But activists said they couldn’t let any lawmaker off the hook.

“We can disagree with those who we believe are our friends, [but] we need to make sure that they understand that we are going to continue pressuring,” Ben Monterroso, executive director of Mi Familia Vota, an organization focused on civic engagement among the Latino community, said in a recent interview. “I just don’t think that giving a pass to any elected official because they are saying that they would act, we need to remind them that actions speak louder than words.”