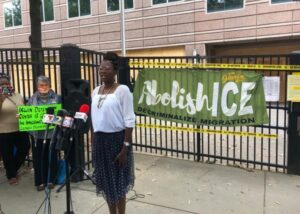 Members of Congress are pressing the administration for further inquiries after the Department of Homeland Security announced this week it is looking into a whistleblower complaint that claimed federal immigration detainees underwent unnecessary gynecological surgeries — including full hysterectomies — without their consent.

Immigration attorneys said they were interviewing detainees this week to determine how widespread the problem might be, with some clients describing experiences where parts of their Fallopian tube and their ovaries had been removed while in custody.

More than 170 Democratic members of Congress dispatched a letter Tuesday to Homeland Security’s Inspector General, urging the office to open “an immediate investigation.”

The allegations stem from a 27-page complaint compiled by Project South, an Atlanta-based advocacy group, as well as Georgia Detention Watch, Georgia Latino Alliance for Human Rights and South Georgia Immigrant Support Network. The complaint lists Dawn Wooten, a former nurse at the Irwin County Detention Center, as a whistleblower who details medical neglect such as refusal to test detainees for COVID-19 and an alarming practice of subjecting female detainees to hysterectomies without them fully understanding what was happening. The detention center is run by private prison company LaSalle Corrections and overseen by U.S. Immigration and Customs Enforcement,

Officials at LaSalle Corrections, which runs the center, did not return several requests for comments.

The complaint doesn’t name the doctor who allegedly performed the procedures, but several attorneys representing the women have identified him as Dr. Mahendra Amin, of Douglas, Georgia.

A person answering the phone at Amin’s office Thursday declined to answer questions or locate Amin for comment. In an earlier interview with The Intercept, the doctor confirmed he has treated immigration detainees and said he had performed “one or two” hysterectomies on patients in recent years, but said all procedures on immigration detainees are approved by officials at the detention center.