Home Federal Enforcement After Trump-Era Turmoil, ICE May Finally Get A Permanent Leader 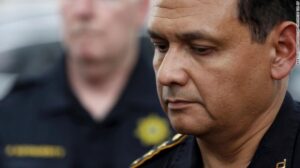 (CNN) – After four years and a rotating cast of temporary leaders, Immigration and Customs Enforcement is inching toward a confirmed head to helm the agency, which came under mounting scrutiny during the Trump administration and continues to face criticism from immigrant advocates.

On Thursday, President Joe Biden’s pick for ICE director, Ed Gonzalez, testified before the Senate Homeland Security Committee, in a step toward possible confirmation. The last time the agency came close to permanent leadership was 2019, with the appointment of Ron Vitiello. Vitiello’s nomination was unexpectedly yanked by then-President Donald Trump and consistent turnover followed.

ICE, which is currently led by career official Tae Johnson, ultimately never had a Senate-confirmed director during the four years of the Trump administration.

Since Biden took office, ICE has stayed at the center of some of the administration’s policy changes. The agency changed its immigration enforcement guidelines and issued new guidance that states women known to be pregnant or nursing should not be detained, arrested or taken into custody unless release is prohibited.

Gonzalez, who was elected sheriff of Harris County in 2016, has a decades-long career in law enforcement, according to his biography. He has met with key representatives in ICE, including Johnson, to talk about the state of the agency, according to a Department of Homeland Security official. There’s a “degree of excitement over his possible arrival very soon,” the official said, noting that the Houston Police Department has worked closely with ICE, particularly on financial crimes and intellectual property issues.