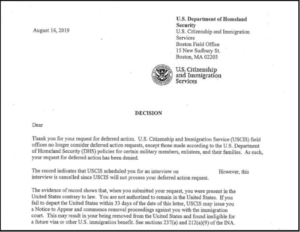 Dismaying immigrants and advocates, U.S. Citizenship and Immigration Service (USCIS) sent out letters saying the agency will no longer consider most deferrals of deportation for people with serious medical conditions, documents show.

The agency is now saying those decisions will be made by another agency: U.S. Immigration and Customs Enforcement (ICE).

That was not made clear to Boston-area immigrants who received the denial letters last week. Advocates said they received no formal announcement of a change in policy.

The small program known as “medical deferred action” allows people to remain in the U.S. for two-year periods if they can prove extreme medical need. Many of the people affected by the policy change came to the U.S. through a visa or other permitted status and are requesting to stay beyond those terms to receive medical treatment.

Hours after this story was published, a USCIS spokeswoman responded to several requests for clarification about the policy shift to say that “medical deferred action requests are now submitted to ICE for consideration.”

This shift in policy has not been announced publicly by the government, and immigration advocates and attorneys question why this new process wasn’t mentioned in the denial letters. WBUR has asked the U.S. Department of Homeland Security and U.S. Immigration and Customs Enforcement for comment.

Anthony Marino, director of legal services for the Irish International Immigrant Center (IIIC), explained that up until now, federal immigration officials would routinely permit eligible sick people to stay in the country under this program. But last week, five of his clients — who he says would have typically qualified — received what appeared to be template denial letters with the exact same language.

“The denials say specifically that the immigration service is just no longer considering deferring action at all in these cases, which would be a first in decades,” he said.