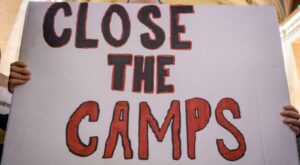 An official complaint to immigration officials from Project South, a regional movement-building organization, alleges that a Georgia Immigration and Customs Enforcement (ICE) detention facility has not taken proper precautions to prevent the spread of COVID-19 and has subjected migrant women to hysterectomies without informed consent. The complaint, dated September 14, includes accounts from detained immigrants and a whistleblower nurse at the Irwin County Detention Center (ICDC), a facility run by LaSalle Corrections, a company that runs private “correctional centers” across the south.

“This place is not equipped for humans,” one detained immigrant told Project South. Another said, “This is the dirtiest facility I have ever been in…only God is taking care of us here.”

Organizers and advocates in the immigration-justice world told Teen Vogue that the allegations are a troubling reminder of the way the U.S. immigration system dehumanizes those detained within it.

“I think so much of what’s in the complaint is actually a lot of stuff we already know about how ICE operates,” Silky Shah, executive director of Detention Watch Network, told Teen Vogue. “Ultimately, there’s nothing we can do to make these facilities better. We have to shut down Irwin and we have to abolish detention.”

The complaint alleges that the ICDC is not following ICE’s own detention guidelines and isn’t practicing the standards outlined by the CDC to stop the spread of the COVID-19 pandemic. Detained immigrants told Project South that social distancing is impossible in the cramped detention center and that they’ve struggled to get cleaning supplies and personal protective equipment. One immigrant told Project South, “There is no way to protect [against COVID-19] at all here in the facility.”

The complaint includes details from Dawn Wooten, a nurse who worked at the facility, about the detention center continuing to transfer detained people into ICDC during the pandemic and concerns that authorities haven’t followed CDC quarantine protocols for immigrants transferred to the facility.