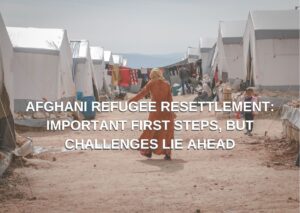 Once the U.S. accelerated evacuation efforts from Afghanistan in late August, American military bases, both at home and abroad, quickly became hosts to an estimated 70,000 Afghan refugees. In addition, many governments across Africa, Europe and South America opened their doors on a temporary basis to thousands more Afghanis that were evacuated by private groups and nonprofit organizations. Further, an estimated tens of thousands more remain in Afghanistan awaiting rescue.

This movement of Afghani refugees has now become one of the largest humanitarian resettlement operations in U.S. history. These refugees include thousands of Afghans who risked their lives to aid the U.S. government during its 20-year war in their country. Others include relatives of those who served or of U.S. citizens. Curtis Velasquez, an Air Force colonel at Holloman Air Force Base in New Mexico, that is currently housing 4,300 Afghan refugees, declares that “We are this generation’s Ellis Island” and “we take great pride in what we are doing… [by providing] …a safe haven where they can transition from… survival mode to a thriving mode”.

This massive resettlement effort will be inevitably hindered by the tremendous immigration processing backlog. The American Immigration Lawyers Association (AILA), in a letter addressed to the Biden Administration, called on them to take immediate actions to “ensure that U.S. Afghan allies and other at-risk Afghans do not languish in legal limbo abroad waiting for an opportunity to restart and rebuild their lives.” They specifically asked that all evacuated Afghans, whether evacuated by the U.S. military or the private sector, be paroled into the U.S. by the U.S. Customs and Border Protection (CBP) within 30 days. They argue that similar programs have been successfully used in the past by the U.S. for Cuban and Haitian nationals during times of crisis.

The current path to immigration status for Afghan refugees is slow and arduous. For example, the Special Immigrant Visa program, set up for Afghans who worked directly for the U.S. government for at least a year and face Taliban retaliation, remains unacceptably backlogged. Another option is to enter the U.S. as refugees, but the U.S. refugee system is struggling after President Trump cut the refugee intake to record lows and some embassies had to stop processing applications because of the Covid pandemic.

Encouragingly, the Biden Administration, along with U.S. nonprofit resettlement organizations, have now made impressive inroads in a relatively short time. As of Nov. 19, more than 22,500 Afghan refugees have been resettled, while 42, 500 more remain in temporary housing on eight military bases around the country. U.S. servicemen and women, many of whom are veterans of the war in Afghanistan, have proved to be staunch advocates and sources of moral support. Daniel E. Gabrielli, the Air Force brigadier general who heads operations at the refugee encampment at Holloman Air Force Base, asserts that “these Afghan guests have sacrificed much for America. I’d actually say that the majority… have risked more for American security than the vast majority of Americans have.”

While important strides have been made in a short time, the Afghani resettlement effort remains an enormous challenge. It is therefore imperative that we not lose momentum or sight of the goal to protect these refugees who have been our faithful supporters and allies, and deserving of security and opportunity in the U.S. This is our longstanding and cherished tradition – to welcome refugees who are in temporary great need, but who will ultimately add strength, depth and diversity to the economic and cultural fabric of our nation.