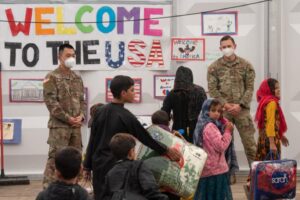 The U.S. has begun discharging thousands of Afghan evacuees from military facilities and placing them in communities across the country as part of the new phase of a massive, nationwide resettlement effort, the latest government figures show.

In recent weeks, 6,000 Afghan evacuees have left temporary housing sites at U.S. military installations to start new lives in America with the help of nonprofit refugee resettlement agencies, according to Department of Homeland Security data. Another 3,000 U.S. citizens, green card holders and Afghans with close ties in America have left the facilities on their own.

Nearly 4,000 Afghan evacuees were resettled in U.S. communities during the past week alone.

More than 55,000 Afghans, half of them children, remain at eight U.S. military sites in Indiana, New Jersey, New Mexico, Virginia and Wisconsin. Another 5,000 evacuees housed at overseas military bases are waiting to be placed on U.S.-bound flights, according to the DHS statistics.

The pace of relocations from the military sites has ramped up in recent days after the U.S. completed a campaign to vaccinate evacuees against COVID-19 and other diseases. The number of arrivals has also increased after the U.S. lifted a three-week pause on evacuation flights earlier this month.

More than 10,000 evacuees have arrived in the U.S. since the flights resumed, bringing the total number of people relocated since mid-August to more than 75,000, DHS figures show. Roughly 89% of the evacuees are Afghans, while the rest are U.S. citizens or green card holders.

Before the mass evacuations started in August, the U.S. government relocated thousands of Afghans who were determined to be eligible for Special Immigrant Visas because of their assistance to American military forces.

A senior Biden administration official, who requested anonymity to speak freely, said the government is working to process evacuees as quickly as possible, while making case-by-case decisions on which U.S. communities can receive them.