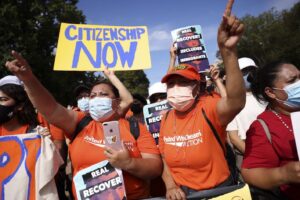 “There is no building back anything without us,” says a New York immigrant activist.

They face tough odds, but immigration advocates are pushing Democrats for a better deal in a bill heading for a vote for the millions of people living in the U.S. without legal immigration status.

Immigration advocates held a call Monday, hours before President Joe Biden signed a key part of his legislative agenda, a massive infrastructure bill that includes funding for roads, bridges, rails and other construction.

Still awaiting action is the more hotly debated social safety net and climate spending bill, also part of Biden’s Build Back Better agenda. That bill includes an immigration “parole” provision that would give undocumented immigrants — some who have been in the U.S. for decades — permission to work and a temporary 10-year reprieve from deportation.

It takes the place of other proposals that would have given some immigrants green cards signifying permanent legal status, the route advocates prefer.

Advocates want to restore a provision that was yanked, which would have created a mechanism for undocumented immigrants who were here before 2010 to get green cards. They face an uphill climb to restore it.

Angelica Salas, the director of the Coalition for Humane Immigrant Rights, which is based in Los Angeles, said thousands of the group’s members “want a path to citizenship that begins with legal residency, not another temporary program.”

Murad Awawdeh, the executive director of the New York Immigration Coalition, said in a Zoom news conference representing immigrants of multiple racial and ethnic backgrounds: “The threat of deportation is always there. A pathway to citizenship is a pathway to stability.”

It’s not the first time undocumented immigrants have had to settle for less than they hoped for from Congress. Recently, in lieu of legislation, the administration has provided quasi-legal status to immigrants rather than any kind of legalization benefit.