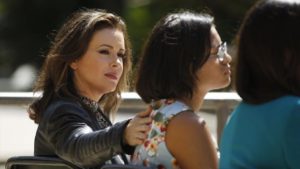 Identifyng only as Wendy B., the teenage girl described escaping a childhood of sexual and physical abuse at the hands of caretakers in her homeland of El Salvador, only to enter a complicated legal system in the U.S. that she could not comprehend.

At first, she was like most in the U.S. immigration system: She could not afford legal representation, so she had none.

“I remember how scared I was when I first arrived in the United States. I remember not understanding anything,” the girl said. “I remember being given documents and papers in English. People asked me to sign things, but I had no idea what they were.

“I had experienced so many terrible things already and then I was being put into a situation that was so complicated that I felt hopeless.”

She described what happened next as luck. The Immigrant Defenders Law Center took on her asylum case, which is still pending. Now she is attending high school in Southern California, with dreams of becoming a neurologist. Her hope has been restored.

“There is no way I could have fought my case without a lawyer,” she said. “It’s impossible.”

As Wendy recounted her experience with the immigration system on the steps of downtown San Diego’s Civic Center Plaza Wednesday, she had some high-profile support behind her — actress and activist Alyssa Milano.

The two were joined by local immigrant advocates to draw national attention to the reality that few migrants undergoing immigration proceedings are represented by attorneys.

Unlike the criminal legal system, which provides defense no matter the ability to pay, the civil immigration legal system does not afford that right. It doesn’t matter if the person is seeking asylum or how the person crossed into the U.S.

Numerous nonprofit organizations and pro-bono efforts fill that gap — an amount that has expanded recently to respond to the Trump administration’s “zero tolerance” policy and separation of families — but nowhere near enough to provide representation for everyone.