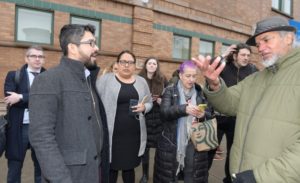 Immigration activists condemned the actions of ICE officers involved in Thursday morning’s shooting of an unarmed man and the arrest of an undocumented resident at a Brooklyn home.

Activists gathered outside of Maimonides Medical Center in Borough Park, where both the wounded man and the undocumented immigrant are hospitalized, claim the ICE agents didn’t properly identify themselves or advise the individuals of the charges against them. They further claimed that ICE officers tasered and pepper-sprayed the undocumented resident while attempting to make the arrest.

Officers struggled with Armando Gaspera Unando before Eric Diaz apparently intervened, punched an officer before being shot in the face by another ICE officer. NYPD officials privately say it was “inappropriate for the officer to shoot an unarmed assailant.”

Police also questioned why ICE failed to notify the NYPD, as the struggle lasted nearly 15 minutes before the shot was fired.

Immigration activists were critical of ICE Thursday, saying they are unduly aggressive with undocumented aliens and “shouldn’t be working in a “sanctuary city.”

Among those at the hospital was Councilman Carlos Menchaca, chairman of the Immigration Committee, a critic of ICE.

“Why is ICE shooting at anyone?” Ragbir asked. “This is a civilian agency, not a police agency, and the mere fact that they used a gun and fired a shot is excessive force.”

Pastor Kaji Dousa of Park Avenue Christian Church gathered with other clergy out of concern and observation of ICE actions.