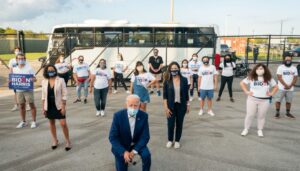 An activist who dumped rubbish at the home of acting US Immigration and Customs Enforcement (ICE) director, Tony Pham, has been charged with misdemeanor offences. Nancy Nguyen reportedly dumped the garbage at Pham’s home while protesting in Virginia with her activist group, VietLead, of which she is the executive director.

Nguyen was part of a protest staged on Pham’s property on September 8, 2020. According to a press release issued by Henrico County police Lieutenant Matt Pecka, ‘a group of demonstrators dumped trash on the yard of the Pham family home, causing fear to the occupants.’

It’s understood that Tony Pham was not at home at the time of the incident.

On October 8, Nguyen was arrested at her home in Philadelphia, but was released a day later following her own recognizance. She was greeted outside the police station by protestors who had gathered demanding her release.

According to a Facebook post issued by VietLead – a prominent Vietnamese activist group in Philadelphia and New Jersey – on their official page, the group said that the protest at Pham’s home was over his appointed as acting director of US Immigration and Customs Enforcement.

The group’s Facebook post said: “Tony Pham continues to use his refugee narrative to justify his qualifications to lead an institution that continues to enact state-sanctioned violence against Black and Brown communities.”

“Nancy publicly spoke out in condemnation of Tony Pham and ICE’s guilty conscience as a representative of a broader Vietnamese and Southeast Asian community unified against all forms of state violence,” the post said.