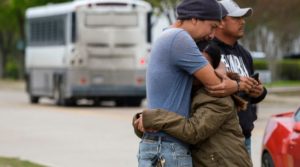 The American Civil Liberties Union of Texas wants more details about an immigration raid in Allen last year that ended in the arrest of 280 people, but the government is refusing to provide any new information.

The organization is suing U.S. Immigration and Customs Enforcement for the release of search warrants that were used in the raid.

ICE blocked the release of the documents after a Freedom of Information Act request from the ACLU of Texas, a move the organization argues violates federal law.

David Donatti, an attorney with the ACLU of Texas, said the public has a right to see the warrants because they are the legal foundation for everything that happened during the raid at CVE Technology Group and how employees were treated.

“We think it’s important to know who authorized these search warrants, when they were issued, what their scope was and what they authorized the government to search for,” Donatti said.

In a written statement, ICE said that it generally does not comment on pending litigation and that “lack of comment should not be construed as agreement with or stipulation to any of the allegations.”

“As part of the Department of Homeland Security’s homeland security mission, our trained law enforcement professionals adhere to the department’s mission and values, and uphold our laws while continuing to provide the nation with safety and security,” the statement said.

ICE arrested 280 people at CVE Technology Group in Allen in 2019 — the largest workplace immigration raid in a decade. At the time, ICE said it was part of a larger investigation into companies that knowingly hire unauthorized immigrants with improper employment eligibility forms.

A few weeks later, the ACLU Foundation of Texas filed a Freedom of Information Act request with the Homeland Security Department, which oversees ICE, for the “administrative and criminal warrants that were issued or served” during the raid.