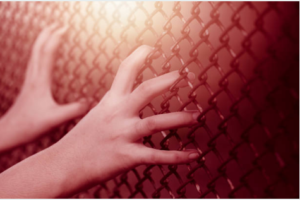 The Trump administration’s plan to construct a prison camp to hold up to 5,000 unaccompanied migrant children “echoes some of the worst elements of our national history,” Carl Takei, a senior ACLU staff attorney, told Splinter. Takei, who now litigates police practices and previously focused on immigration, added that “the scale of it is enormous.”

He called the plans “moral horror” in a tweet after learning about how the Trump administration is reportedly looking into building tent cities at military posts to lock up between 1,000 and 5,000 unaccompanied children.

Currently more than 11,200 migrant children without a parent or guardian are in the custody of the Office of Refuge Resettlement. The shelters are 95 percent full, according to McClatchy, who first reported the news about the tent city proposal.

Takei offers a deeply personal and nuanced perspective: He is a Japanese-American with family members who were incarcerated in internment camps, in addition to being an expert on immigration detention practices. Takei has previously written about how his grandmother, Bette Takei, was incarcerated in a federally run “internment camp” while his grandfather, Kuichi Takei, fought in an artillery unit of the United States Army in Europe during World War II.

“So, while Kuichi fought for the allies in Europe, my grandmother Bette waited for him in an American version of a concentration camp,” Takei wrote in an ACLU blog post last year.

“Up to 5,000 children being held in a single tent city prison camp” recalls “the incarceration of Japanese Americans during World War II and the forced separation of children from their parents on Native American reservations,” Takei said.

Takei was referring not only to Japanese internment camps, but also the American Indian children who were forcibly separated from their parents when they were sent to government- or church-operated boarding schools in the late 19th century. The current administration’s policy to separate migrant families and proposal to jail unaccompanied minors in camps “really combines the two [worst elements] together.”