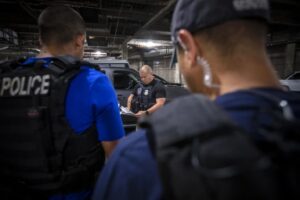 The suit accuses the department of violating California’s four-year-old Senate Bill 54, which prohibits law enforcement in the state from aiding federal immigration enforcement or holding inmates past their set release dates to allow Immigration and Customs Enforcement agents to retrieve them.

“Sheriff Scott R. Jones has long championed cooperation with ICE and fiercely opposed SB 54 and similar laws,” the suit reads. “Unable to stop SB 54’s passage, the sheriff and his office have revised its operation through a policy and practice of notifying ICE of when a person will be released from its custody and transferring that person to ICE, including in situations where that person lacks a qualifying criminal conviction or charge.”

The suit claims information in the lawsuit was obtained through emails and documents received via public records requests. When The Times asked for comment last Wednesday, both Sacramento County officials and the sheriff’s department had not seen the complaint. The latter said that, “it’s the long standing policy of Sacramento County not to comment on pending litigation.” A follow-up request on Friday was not answered.

One of the plaintiffs in the ACLU lawsuit is Misael Echeveste, who was transferred from Rio Cosumnes Correctional Center to ICE in 2018, the ACLU said in a statement.

“Echeveste remembers that, a few days before his scheduled release from the RCCC, sheriff’s deputies told him he was getting released early. They congratulated him and took him to a changing room,” the ACLU said. “But, instead of returning his street clothes, they handed him a green ICE detainee uniform and announced, laughing, that they were transferring him to ICE custody.”

In July 2018, a man was taken into custody on suspicion of driving under the influence of alcohol, the suit claims.