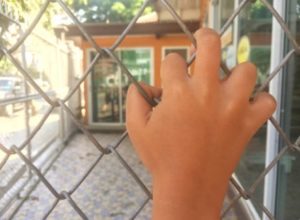 CHICAGO — Abner, a 17-year-old Guatemalan boy, vividly recalls the first 48 hours he spent inside the U.S. Border Patrol station in Yuma, Arizona. He was awake for all of them because there was no space to lie down.

Packed into a cell with other migrant boys, Abner said the older children would give the 8, 9, and 10-year-olds space to lie down on the floor while they would try to sleep sitting or standing up. With nothing to cover him, Abner would tremble.

“I had to stay almost two days like this, standing. I didn’t sleep. And they didn’t treat me well because I would ask for at least food or water or something to cover myself with and they would deny it,” Abner told NBC News in Spanish.

Eventually, he learned to sleep on a pile of trash in the corner of the cell, said Abner, who does not want his full name or his face used out of fear he will be targeted for deportation.

Earlier this month, NBC News reported that children held at the Yuma station between April and June had told government case managers about overcrowding and poor conditions, including retaliation for complaints, at least one sex assault and sleeping on concrete.

In total Abner spent 11 days from late May to early June in the Yuma border station. He describes them as filled with hunger and thirst, extreme temperatures and fear of the guards manning the facility. They refused to give him food when he asked, mocked him if he asked what time it was, and, on one occasion, punched another boy in the stomach, Abner said.

“With a punch they knocked the wind out of him … But I don’t know why,” Abner said, describing what he said happened to the 16-year-old.

Abner said he and his cellmates were only fed twice a day, leading him to become very hungry.