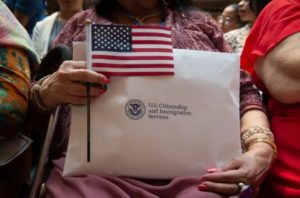 A Trump administration immigration official who had previously headed an anti-immigration group that had been dubbed a hate group has resigned, according to an email sent to Department of Homeland Security staffers on Monday.

Julie Kirchner, the US Citizenship and Immigration Services (USCIS) Ombudsman since 2017, offered President Donald Trump her resignation this week, acting DHS Secretary Kevin McAleenan said in an email to staffers on Monday.

It was not immediately clear why Kirchner had resigned.

Kirchner had previously worked at FAIR, a group that advocated for policies that restrict immigration.

Michael Dougherty, assistant secretary for border, immigration, and trade policy, will be taking over the ombudsman role, which is tasked with helping applicants fix problems with their immigration status.

Earlier this year, Kirchner had reportedly been eyed to head up USCIS.

When her appointment was originally announced, advocacy groups were outraged, due to her background at FAIR, which the Southern Poverty Law Center had labeled a hate group and “America’s most influential anti-immigrant organization.”

“Kirchner’s new position is a very powerful one, which it makes it all the more disturbing considering her past work,” the SPLC said at the time.

Earlier this month, Trump announced that McAleenan, the acting DHS secretary, would also be stepping down from his role.