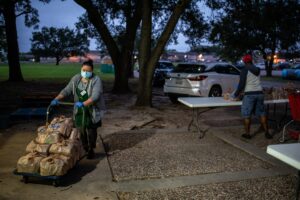 The “public charge” rule was supposed to ensure that green cards go only to self-sufficient immigrants, but in the pandemic, it is driving up hunger and leaving Joe Biden with a quandary.

HOUSTON — The cars began filing into the parking lot shortly after 6 a.m., snaking around police officers who directed traffic to masked volunteers standing ready with boxes of frozen pizza, tortillas and brown bags of canned food.

The coronavirus pandemic pushed many of the hundreds of families to the drive-through food pantry, but among the several immigrant families in line, another cause was at work: President Trump’s newly expanded regulation that blocks access to green cards for legal immigrants who are deemed likely to accept any government assistance. Even with citizen children who clearly qualify for federal assistance, undocumented immigrant parents are eschewing programs like food stamps and are flocking to food pantries.

That, in turn, is badly straining relief agencies and presenting a challenge to President-elect Joseph R. Biden Jr., who could confront rising hunger by expanding government programs but will not be able to quickly undo the Trump administration’s expansion of a Clinton-era regulation that is pushing immigrant families away from those programs.

Dani, a 34-year-old undocumented immigrant from Honduras and the mother of three daughters, said she was alarmed early in the Trump administration when the president described immigrants as criminals and called for deportation raids. But she changed her behavior and dropped off food stamps and Medicaid in 2018 when the administration announced its so-called public charge rule, expanding the authority of officials to deny green cards to immigrants who might need public assistance.