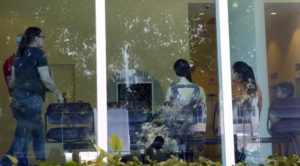 Department of Homeland Security officials expect about 150 immigration judges from across the US will be selected to handle cases involving asylum-seekers forced to remain in Mexico while their cases proceed, according to a source with knowledge of the matter, a massive potential increase in assignments that threatens to overwhelm an already struggling court system.

Around a dozen judges currently presiding over courts in San Diego and El Paso, Texas, handle the cases of people referred under Migration Protection Protocols, the controversial Trump administration policy forcing asylum-seekers to remain in Mexico as their cases move through the immigration system. While the cases can take months or years to be scheduled, the number of individuals included in the program has expanded to more than 35,000, according to figures obtained by BuzzFeed News.

The Trump administration hopes to change that by soon opening facilities along the border to handle the cases. Officials plan to open two border courts in Texas — in Laredo and Brownsville — by the middle of September, in which they will hear up to 20 cases per day, according to a government briefing document obtained by BuzzFeed News. A DHS spokesperson said the date the facilities would open was still to be determined.

On Tuesday, Rep. Lucille Roybal-Allard, who chairs the House DHS Appropriations Subcommittee, revealed in a letter that the agency had plans to transfer $155 million in federal disaster funds to Immigration and Customs Enforcement to help fund the new facilities.

The cases heard at the border are expected to be conducted primarily via video teleconferencing, allowing for more judges across the country to be brought into the process. Assistants, working on contract, will help organize the hearings by taking roll call, send case documents to judges in other locations, and operate the video systems, according to a separate DHS planning document obtained by BuzzFeed News.