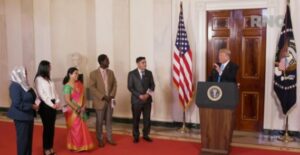 Legal Immigration Cut in Half, Most Categories Blocked: By 2021, Donald Trump will have reduced legal immigration by 49% since becoming president – without any change in U.S. immigration law, according to a National Foundation for American Policy analysis. An April presidential proclamation blocked the entry of legal immigrants to the United States in almost all categories.

Reducing legal immigration most harms refugees, employers and Americans who want to live with their spouses, parents or children, but it also affects the country’s future labor force and economic growth: “Average annual labor force growth, a key component of the nation’s economic growth, will be approximately 59% lower as a result of the administration’s immigration policies, if the policies continue,” according to the National Foundation for American Policy.

The Most Highly Skilled Foreign-Born Blocked or Denied at High Rates: The denial rate on new H-1B petitions for high-skilled foreign nationals has increased from 6% in FY 2015 to 30% in FY 2020. A June 2020 presidential proclamation suspended the entry of foreign nationals on H-1B and L-1 (intracompany transferees) visas.

As reported in August, “Today, even the most highly skilled individuals in the world cannot enter America under the Trump administration’s immigration policy. Reports from attorneys and a statement from the State Department confirm that U.S. consular officers in Europe are denying O-1 visas for individuals with ‘extraordinary ability’ based on a health pretext.”

Refugees and Asylum Seekers, including from Venezuela, Denied: At least one speaker at the convention discussed the protection Americans once offered Cuban refugees and spoke sympathetically about the victims of Venezuela’s socialist government.