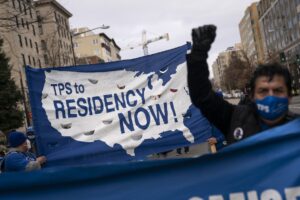 The U.S. House is this week taking up two major legalization bills creating paths to citizenship for undocumented immigrants with temporary protections, including Deferred Action for Childhood Arrivals (DACA) recipients and Temporary Protected Status (TPS) holders, and undocumented farmworkers who feed the nation.

Both the Dream and Promise Act and Farm Workforce Modernization Act passed during the previous Congress, but were blocked in the Republican-controlled Senate. USA Today reports legislators and advocates now hope the hugely popular paths become an opening to securing legalization for all 11 million undocumented immigrants, as also proposed by President Joe Biden.

“’We want to achieve a breakthrough in the next few months,’ said Frank Sharry, executive director of America’s Voice, and the organization’s ‘strategy is to push for the things that can pass in the House,’” USA Today reported. “If those bills pass, it could create momentum to take up the full comprehensive immigration reform proposed by Biden, he said.”

Recent polling has continued to confirm massive, bipartisan support behind legalizing DACA recipients, as well as farmworkers and undocumented essential workers. “The survey found the DREAM Act to have 72% support, citizenship for undocumented farmworkers to have 71% support, and citizenship for undocumented essential workers to have 66% support,” polling conducted by Global Strategy Group, Garin-Hart-Yang, and LD, Insights in partnership with FWD.us and America’s Voice found.

Researchers found that voters, including a majority of the Democratic base, would be upset if permanent relief didn’t pass Congress.