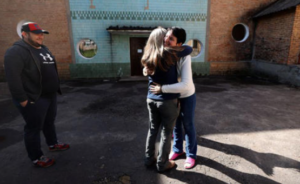 As the world grapples with nearly 90 million displaced people, the U.S. is leaning more and more on its citizens to alleviate the country’s complex and overburdened immigration system.

And one fledgling nonprofit’s unique approach to sponsor-based refugee resettlement is so far, a success.

WelcomeNST, short for “neighborhood support team,” is a Massachusetts-based nonprofit that matches refugees with communities seeking to support them.

It’s a relatively simple answer to the country’s incredibly confusing immigration system — find a neighborhood willing to do what government and resettlement agencies typically do.

“The sponsor is essentially acting as the resettlement agency for the family they are sponsoring,” said Nate McDonald, deputy director of the Utah Department of Workforce Services, which houses the Office of Refugee Services.

And in about a year, WelcomeNST has mobilized thousands of people across 90 neighborhoods to facilitate the resettlement of roughly 500 Afghan and Ukrainian refugees. About 65 of those support teams helped resettle Afghans, while 25 were created in the wake of the war in Ukraine — six are located in Utah, the most of any state.

“We have an opportunity to create an organization that enables communities to take the lead,” said Liz Davis-Edwards, executive director of WelcomeNST. “The power rests in the community, and that is a really significant shift in the way resettlement has ever been done in the U.S.”

The support is fueled in part by a diverse group of religious denominations, whose congregations make up over 60% of the support teams. Roughly half of them are members of The Church of Jesus Christ of Latter-day Saints, says Davis-Edwards.

One family is responsible for filing out the application, which requires them to declare their own income as well as the income of the refugee families they are advocating for.

But the various tasks that come with supporting a refugee family — housing, transportation, enrolling the kids in schools, financial support, taking English as a second language classes and navigating the mountain of red tape immigrants face — is divvied up among members of the neighborhood support team.