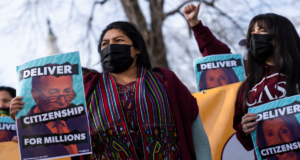 A draft advisory for the bill told Latino Rebels, “Specifically, the bill establishes a seven years of presence eligibility to apply for a green card. It incorporates a rolling component so that future legislation would not be required to update the INA registry.”

A bill similar to one already in place, the Immigration and Naturalization Act (INA) of 1952, since first introduced, has been updated on a number of occasions, the biggest being moving forward the date that immigrants become eligible to get a green card. The new bill to be introduced would update the registry date by replacing the one before, Jan. 1, 1972, making it a requirement for immigrants to be present for seven years to be eligible.

Maria Mercado, a spokeswoman for Movement for Justice in El Barrio, an organization mainly made up of immigrant women, called on other members of Congress for support.

“This would provide immediate relief to essential workers, DREAMers, TPS-holders and farmworkers… Immigrants have always been essential workers that have sustained the economy of this country. That was made much more visible to all throughout the pandemic, when essential workers sacrificed and risked their lives on a daily basis for civil society. If a pathway to citizenship is not approved now, then what will happen years down the line when civil society begins to forget these efforts?” she said.

The old bill has lived as a law for the last half century, but Congress can make it accessible to millions of undocumented people by passing a new bill.

According to FWD.us, a pro-immigration group, more than 73,000 undocumented immigrants through registry have secured green cards but with every year that passes, more immigrants are forced to miss the cut off entry due date because of eligibility.