Home Resources A National Day Of Action Sees Demonstrations In Philly And D.C. Demanding A Pathway To Citizenship 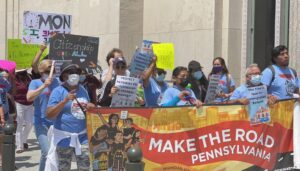 The United States has more immigrants than any other country in the world, according to 2020 data from the Pew Research Center.

Today, more than 40 million people living in the U.S. were born in another country, accounting for one-fifth of the world’s migrants.

Of those 40 million, about 11 million immigrants are undocumented, and this population makes up 3.2% of the overall population, but 4.4% of the country’s workforce.

If it wasn’t for immigrant essential workers, in fields like health care, child care, agriculture and food, waste management, education, and more, the COVID-19 pandemic would have had an even greater negative impact on the country.

Immigrants have been, and always will be, essential, not just as workers, but as valuable members of society. Yet, the fight for economic equality, citizenship, protections and other rights for this large group of undocumented immigrants is still in full force.

On Friday, July 23, immigrant groups and advocates in Washington D.C. and in Philadelphia are taking part in a “national day of action,” to demand a clear pathway to citizenship.

In D.C, a large group of immigrants and activists will be overtaking Arlington Memorial Bridge on both land and water. Hundreds of immigrant mothers, families, activists and allies will march on the bridge while 20 kayakers row below in support of adding citizenship to President Joe Biden’s infrastructure package.

As Congress considers budget resolutions to enact key parts of the American Jobs Plan and the American Families Plan, the activists are planning to send the message loud and clear that immigrants are essential infrastructure and deserve recognition, inclusion and a path towards naturalization.

The Arlington Memorial demonstration is part of a national day of action that includes FIRM and We Are Home partners across the country occupying infrastructure spreading the same message.