Home Federal Enforcement A Mother, Separated From Her Children At The Border, Comes Home 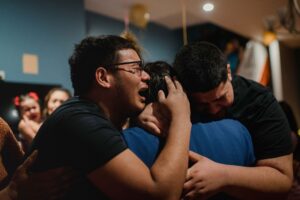 The Biden Administration has begun a massive effort to reunite more than a thousand families torn apart by Trump.

For the past two years, Keldy Mabel Gonzáles Brebe de Zúniga kept a daily ritual. Rising before dawn, she’d walk toward the border in Ciudad Juárez, Mexico, where four bridges lead into El Paso, and visualize herself on the other side. She’s a religious woman known to friends, family, and acquaintances as la pastora, or the pastor. In Juárez, she devoted herself to the city’s population of migrants. Recently deported families would call her with the rough coördinates of where they were—highway mile markers, descriptions of intersections—and Gonzáles Brebe would take a taxi and bring them to someplace they could sleep. At migrant shelters, she was a regular presence, delivering sermons and benedictions. But each morning, standing within sight of one of the bridges, she made time to say a prayer for herself. She prayed that the border would open for a moment, just long enough so that she could finally see her children.

The last time that she had was in the fall of 2017. Her family, fleeing Honduras, had scattered across the continent. Gonzáles Brebe’s husband and oldest son, who was eighteen, had already crossed into the U.S. Her mother and niece were in Tapachula, Mexico, near the Guatemalan border. Gonzáles Brebe and her two middle sons, who were thirteen and fifteen, attempted the final leg of the journey together. It was around noon, on a hot day in September, when they flagged down a Border Patrol cruiser in the New Mexico desert. They planned to turn themselves in and apply for asylum. A day and a half later, at a holding cell in Deming, thirty-five miles north of the border, agents took her away in handcuffs, to prosecute her for the misdemeanor crime of illegal entry. Her boys screamed and cried; she still remembers the feel of their hands grasping at her clothes. The government assumed custody of her children and moved them to a shelter for minors who’d come to the U.S. alone.