Home Resources A Mother and Her 3-Year-Old Daughter Await Asylum Proceedings In Mexico, With No Answers In Sight 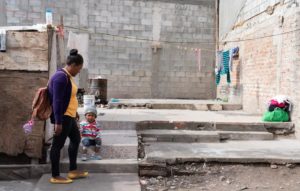 TIJUANA — When the migrant caravan made headlines last year, Marla and her then 2-year-old daughter were part of the group travelling the long journey from Honduras that ended at the U.S.-Mexico border. During the treacherous trek, she and the other asylum seekers faced numerous dangers as they slept on the streets, got sick and went hungry. Marla and her daughter, now 3 years old, are now part of the U.S. Department of Homeland Security Migrant Protection Protocols (MPP) program, also known as the “Remain in Mexico” policy. As a year has passed, they’ve attended several court hearings and are hoping to obtain asylum, yet there are no clear answers in sight.

“We ate when we were given a handout. We never knew when we would eat again. Sadly, it is still the same here in Tijuana,” the 25-year-old mother said tearfully about her journey with the caravan. “Sometimes we don’t know when the next meal will come, being stranded here between temporary jobs, shelters and sometimes a room to rent.”

After some agonizing months, waiting in shelters to apply for asylum to no avail, at one point Marla decided to cross the border with her 22-year-old sister and their two children in order to apply for asylum inside the U.S. They crossed by El Chaparral.

“We had to cross a river that has sewage. We encountered a Border Patrol agent who said, ‘Señoras, no crucen o disparo’ [‘Ladies, don’t cross or I’ll shoot],” she said. They still crossed and were soon processed and put through removal proceedings. After a few days in detention, in what is often called the ‘”hielera” (ice box), Marla said they were returned to Tijuana where they didn’t have a place to stay since they lost their spot at the shelter. They also didn’t have any food.