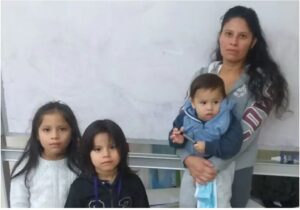 Edgar Diaz-Palma was driving to a local bakery last month to buy breakfast for his children when a black, unmarked SUV behind him flipped on its lights.

Diaz-Palma pulled over, and an officer told the 42-year-old father of three that he had made an illegal U-turn, according to his attorney. The officer asked for Diaz-Palma’s license, and moments later told the Langley Park resident that he had a pending issue with immigration and was under arrest.

Diaz-Palma was ushered into a second unmarked police vehicle, this time a van, and driven to a U.S. Immigration and Customs Enforcement processing center in Baltimore. Along the way, he called his partner to explain why he wouldn’t make it home.

In the weeks since his arrest, family, friends, legal advocates and elected officials have been scrambling to piece together the facts of that morning, stop his deportation and determine why ICE targeted Diaz-Palma — all with the hope that they could delay proceedings long enough to see President-elect Joe Biden usher in new immigration policies.

“Edgar has been in this county 20 years, has three American-born children, who now don’t know where their father is,” said Bradford Brown, a family friend who has helped draw attention to Diaz-Palma’s story. “I know this is tearing these kids apart. For what?”

Brown said he prayed that they would be able to slow his friend’s case down until Biden took office.

But time ran out. On Dec. 1, Diaz-Palma was deported.

In a statement to The Washington Post, an ICE spokesperson said Diaz-Palma was arrested as part of the agency’s Operation Broken Promise, a nationwide sweep of undocumented immigrants who did not leave the country after receiving voluntary departure orders. The operation commenced Nov. 2, the day before the presidential election.