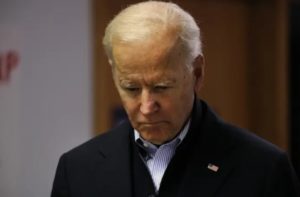 DES MOINES — One of the nation’s largest immigrant rights groups is protesting former vice president Joe Biden over his approach to immigration ahead of the first Democratic debate of 2020.

“He does not have any idea of the pain they caused kids, families, parents who were separated from their kids. The pain is irreparable pain,” said Elsa Osorio, 45, whose husband was arrested by ICE agents after a routine traffic stop and deported to Mexico under the Obama administration in 2011.

Osorio, a member of the immigrant rights group United We Dream Action, was one of about a dozen protesters gathered at Drake University in Des Moines outside the venue where six presidential candidates, including Biden, will take the stage this evening. (A mariachi band was also on hand.)

The group is calling for Biden “to commit to stopping deportations, dismantling ICE and CBP,” said José Alonso Muñoz, national communications manager for United We Dream Action and a DACA recipient himself. “These are not real commitments that he’s been willing to make up until this point, but that’s what we need to be able to ensure that immigrants are protected.”

“I’m a child of a Latinx immigrant and an African American,” said Gabriel Madison, 17, another member of United We Dream Action and a DC resident who will vote for the first time this year.

“Our lives are on the line with whatever presidential candidate proceeds, so I’m just hoping that my community stays safe and that our voices are heard,” he said.

Immigrant advocates have been critical of Biden’s defense of the Obama administration’s immigration record, which included 3 million deportations in its early years.

At a Latinx-focused town hall in Las Vegas on Saturday, Biden showed signs for the first time of slightly distancing himself from that record: “You privately know where I was on that, but I’m not going to get into that because I was vice president,” Biden told Hector Sanchez Barba, executive director of Mi Familia Vota.

United We Dream Action and other groups have called for Biden to outright acknowledge and apologize for the millions of deportations that occurred when he was vice president.