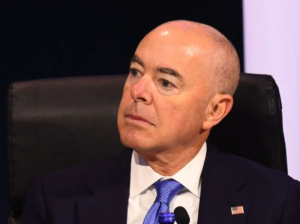 A federal judge in Texas has blocked yet another of President Biden’s major immigration policies.

Federal Judge Drew Tipton threw out a Department of Homeland Security policy that limits who immigration authorities can arrest and deport. In a ruling published Friday, Tipton sided with the states of Texas and Louisiana, which argued that the DHS guidance is preventing U.S. Immigration and Customs Enforcement from enforcing the law.

Mayorkas said that being present in the country without authorization “should not alone be the basis” for arrest or removal — a sharp reversal from the Trump administration, when ICE agents and officers were free to detain anyone they encountered who was in the country illegally.

Lawyers for the Biden administration defended the policy as a reasonable exercise of prosecutorial discretion, and the best way to make use of DHS’s limited resources. But Tipton was not convinced.

“The Executive Branch may prioritize its resources. But it must do so within the bounds set by Congress,” Tipton wrote. “Using the words ‘discretion’ and ‘prioritization,’ the Executive Branch claims the authority to suspend statutory mandates. The law does not sanction this approach.”

This is not the first time Tipton, who was appointed by former President Trump, has ruled against the Biden administration. Last year, he blocked President Biden’s attempt to put a 100-day moratorium on deportations. Tipton also tried to block an earlier version of DHS’s enforcement guidance last summer, but that order was stayed on appeal.

Tipton held a bench trial earlier this year before issuing his final ruling.

His latest decision adds to a growing list of Biden administration immigration policies that have been blocked by federal judges in Texas and Louisiana who were appointed to the bench by the previous administration; that’s prompted immigrant advocates to complain of “a shadow Trump administration” that is preventing Biden from charting his own course.