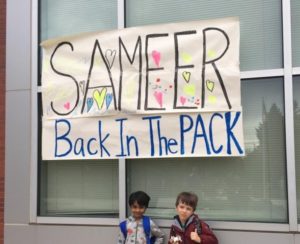 The posters were huge, and the cheers were loud when the kids finally returned to their classrooms.

“One of my friends almost strangled me,” said Sitara Mazumdar, 11, describing the frenzy of hugs that enveloped her when she bounced back into school, fresh off a plane she boarded 10 time zones away, but barely jet-lagged because of all the excitement.

Her brother, Sameer, was greeted like a Greek hero returning from an odyssey and posed in front of a poster his squad of fellow 6-year-olds made for him: “Back In The PACK.”

After nearly three months trapped in a frightening immigration limbo, the family returned from India to their D.C. condo, to their schools and jobs, to their friends and their lives. All it took was one stamp on a passport.

Many other legal immigrants have been caught in the same State Department mess, as longtime holders of H1B visas are suddenly denied a renewal and are trapped in their native countries. Even if, like Saurav Mazumdar, they’ve lived in the United States for nearly two decades.

Mazumdar, 42, went on a two-week vacation to visit relatives and renew his H1B visa this summer, joining his wife, Ishita Menon Mazumdar and his kids, who went ahead of him to maximize grandma time.

The routine trip – one Saurav takes every three years as he waits to become a citizen — turned into a nightmare when the U.S. Embassy denied his renewal, but gave him zero answers about why.

School started, the kids missed lessons and still, the Mazumdars got no answers.

They shoe-horned their family into Ishita’s parents’ home. Mazumdar stayed on U.S. time and worked from home, the kids kept up violin lessons and friendships over Facetime.

They hired an immigration lawyer. Mazumdar sent message after message to the embassy, always getting back a template response.

“What do you do? It was very frightening,” Ishita said.