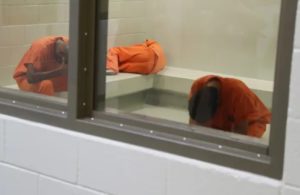 A 39-year-old British man died in Immigration and Customs Enforcement custody on Saturday — the fifth person to do so since October, according to a person with knowledge of the matter.

The 39-year-old man was identified as Ben James Owen in a statement released by ICE. He died at the Baker County Detention Center in Macclenny, Florida, and officials said that the preliminary cause of death appeared to be “self-inflicted strangulation; however, the case is currently under investigation.”

ICE officials said Owen, who had entered the country on a temporary visa in July, had been arrested by the Port Orange Police Department on suspicion of felony aggravated stalking, felony false imprisonment, domestic assault, and violating the conditions of his pre-trial release.

ICE officials arrested him after he was released from criminal custody on Jan. 15. He was then placed into deportation proceedings.

ICE has expanded the number of people it detains to record levels under President Donald Trump. As of late January, the agency was detaining nearly 41,000 immigrants. The peak came this summer, when around 55,000 immigrants were in custody in local jails and private prisons across the country.

ICE officials have long said that the agency is dedicated to providing timely and comprehensive medical care to immigrants in its custody, noting that they have access to a daily sick call and 24-hour emergency care. The agency has publicized that it spends more than $269 million each year on health care services.

The medical care in ICE detention has come under scrutiny by congressional officials in recent weeks.

In December, the House Oversight and Reform Committee announced it had opened an investigation into the medical care of immigrant detainees in the wake of a BuzzFeed News story that revealed a series of allegations of substandard care from a whistleblower.

The congressional committee issued letters demanding a series of documents from the Department of Homeland Security and ICE officials.

BuzzFeed News first reported the memo and documented how it contained reports of detainees being given incorrect medication and suffering from delays in treating withdrawal symptoms, as well as one who was allowed to become so mentally unstable he lacerated his own penis and required surgery.