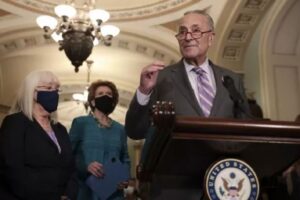 A group of 90 Democrats in the House of Representatives sent a letter to the Senate on Monday requesting a path to citizenship for undocumented immigrants be written into President Joe Biden’s Build Back Better bill.

In the letter, numerous influential House Democrats urged the Senate to include legislation in the bill that would allow certain undocumented immigrants to seek citizenship, including essential workers and Dreamers.

House Democrats did include a provision in the Build Back Better act that allows these undocumented immigrants to apply for five-year work permits. However, an actual route towards citizenship was not something that was included in the House’s version of the bill..

“One need look no further than previous CBO [Congressional Budget Office] scores for the same proposal to know that providing a pathway to citizenship would have a massive budgetary impact,” the letter said.

“When Congress promises ‘immigration reform’, as it has done throughout the negotiation process, our party must fully deliver on that promise,” the letter continued.

The letter added that while these immigrants have consistently been granted temporary status allowing them to stay in the U.S., Build Back Better as it stands would only extend these statuses without solving the immigration issue.

Also addressed was the stance of Senate Parliamentarian Elizabeth MacDonough. The parliamentarian is responsible for upholding and interpreting Senate rules and procedures.

MacDonough has stated, contrary to the CBO’s report, that this immigration reform would not have any significant budget impact. Despite this, the House letter noted that the role of the parliamentarian is simply to advise, and the Senate is not required to uphold her opinion.