Home Resources 90 Day: Usman Surprises Kim Twice with His Own Proposal and Offer to Adopt After Immigration Scare 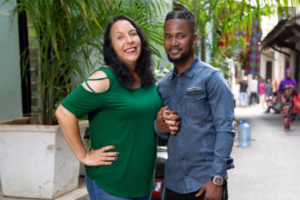 Kim Menzies and Usman “Sojaboy” Umar have begun to consider their options after learning he can’t legally have a second wife in America.

Sunday’s episode of 90 Day Fiancé: Happily Ever After? showed the engaged couple debating how to move forward after an immigration attorney told them polygamy is illegal in America — even if his other wife is in another country. The problem looming was the contract Kim, 52, signed with Usman’s mother, which promised she would allow him to take a younger wife.

Lucky for Kim, Usman, 33, seemed to have a solution. A teaser for next week’s episode showed Usman telling Kim his big idea — adoption.

“I feel like maybe I’m going to adopt,” he told Kim via Zoom.

Kim has historically been opposed to raising Usman’s kids — though she welcomes his plan to have children with another woman. So, the first question on her mind was: “Who the f— raises the child? Me?”

Usman then countered, “I’m asking — do you want to raise him?”

Though kids weren’t part of their original plan together, it could be a fitting alternative to Usman taking a second wife.

Despite the turmoil that the immigration meeting brought, Kim and Usman had a relatively romantic last day in Nigeria before Kim flew home to America. Usman — who’d accepted Kim’s proposal a few days before — to offer his own romantic gesture and to propose to Kim himself.

The tearful moment was full of “I love yous” and hugs as Usman got down on one knee in his living room to pop the question.

It was an easy, and emotional, “yes” for Kim.

In a confessional, Usman shared why it was important for him to ask Kim the question. “Kimberly propose to me, I appreciate it, I understand how much she love me,” he said. “But that is not the ideal way.”