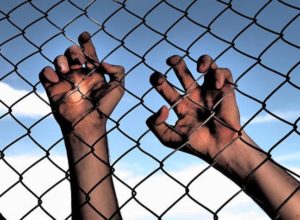 His arms wrapped around his wife and two teenage children, Jorge Garcia’s eyes welled up Monday morning as he looked into their eyes one last time near the entrance to the airport security gate at Detroit Metro Airport.

His wife, Cindy Garcia, cried out while his daughter, Soleil, 15, sobbed into Garcia’s shoulder as they hugged. Two U.S. immigration agents kept a close watch nearby.

After 30 years of living in the U.S, Garcia, a 39-year-old Lincoln Park landscaper, was deported on the Dr. Martin Luther King Jr. holiday from metro Detroit to Mexico, a move supporters say was another example of immigrants being unfairly targeted under the Trump administration.

Jorge Garcia was brought to the U.S. by an undocumented family member when he was 10 years old. Today he has a wife and two children,, all of whom are U.S. citizens

Garcia had been facing an order of removal from immigration courts since 2009, but under the previous administration, he had been given stays of removal. But because of the Trump administration’s immigration crackdown, Garcia was ordered in November to return to Mexico. His supporters say he has no criminal record — not even a traffic ticket — and pays taxes every year.

Nevertheless, Garcia had to be removed, said Immigration and Customs Enforcement (ICE). On Monday morning, accompanied by ICE agents at Detroit Metro Airport, Garcia went through security as supporters around him held up signs that read, “Stop Separating Families.”

“We love you, Jorge,” said Mayra Valle of Detroit as Garcia hugged his wife and children. “They’re a good family, they’re hardworking. … This is so sad. This is outrageous. We never expected this would happen.”

Garcia’s case is the latest example of immigrants who previously would have been allowed to remain in the U.S., but not now as the U.S. seeks to remove more immigrants. Garcia is too old to qualify for DACA, which allows the children of undocumented immigrants to legally work and study in the U.S.