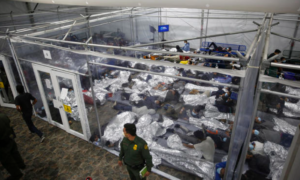 More than 12,000 migrant children reentered U.S. border custody as unaccompanied minors in fiscal year 2021 after being expelled to Mexico, typically with their parents, under the Title 42 pandemic restrictions, unpublished government statistics obtained by CBS News show.

Over a 12-month span beginning in October 2020, U.S. Border Patrol agents processed 12,212 unaccompanied migrant minors who had been previously expelled under Title 42, according to internal Customs and Border Protection (CBP) data obtained through a Freedom of Information Act (FOIA) request.

The statistic provides a glimpse into one of the unintended consequences of the Title 42 policy: migrant parents opting to “self-separate” from their children to allow them to enter the U.S. as unaccompanied minors, who have not been subject to the pandemic-era border expulsions since November 2020.

Government officials and advocates have previously described the “self separations” among migrant families during Title 42’s enforcement, but the Border Patrol figure shows how widespread the phenomenon was last year. Unlike the Trump administration, the Biden administration declined to use Title 42 to expel unaccompanied minors.

The data also show these self-separations and repeat crossings by migrant children were some of the factors that contributed to record arrivals of unaccompanied minors to the U.S. southern border in fiscal year 2021.

While border arrivals of unaccompanied children in the current fiscal year have not reached the monthly records set last year, they’ve remained well above historical trends and are on track to come close to the nearly 145,000 Border Patrol apprehensions recorded in fiscal year 2021, CBP figures indicate.

Seven months into fiscal year 2022, Border Patrol has encountered more than 84,000 unaccompanied minors along the Mexican border, according to the CBP data.