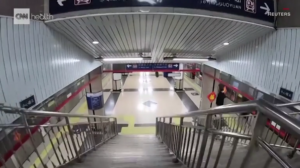 Washington (CNN)-As the United States responds to the coronavirus pandemic, the Trump administration has made sweeping changes to the country’s immigration apparatus, altering daily operations and disrupting the lives of thousands.

In a little over a week, there have been a dozen changes, ranging from postponing immigration hearings to pausing deportation flights to certain countries and suspending refugee admissions. The tweaks to the system are being made incrementally, though rapidly, as the pandemic spreads across the country.

Against the backdrop of the coronavirus outbreak, the Trump administration is also trying to move forward with some of its most restrictionist policies that have struggled to be put into practice, including blocking entry to asylum seekers.

President Donald Trump confirmed he’s planning to bar entry to migrants during a White House briefing Wednesday. “The answer’s yes,” Trump said when asked if he was planning to take that step, which he said would come “very soon,” adding, “Probably today.”
Below is a list of the changes to the immigration system over recent days:

March 18: Immigrations and Customs Enforcement told congressional staffers that it has temporarily adjusted its “enforcement posture,” according to a memo obtained by CNN, marking a change in operations as a result of the pandemic. The agency said it will focus on those who pose a public safety risk and are “subject to mandatory detention based on criminal grounds.”

Immigrant advocates have called on ICE to dial back operations amid the coronavirus outbreak, arguing that the agency has instilled fear in the immigrant community and might discourage some from seeking medical attention.
The agency said in its memo to staffers that it will not carry out enforcement operations at or near health care facilities, “except in the most extraordinary circumstances,” adding that individuals should not avoid seeking medical care over fears of enforcement.